Op Art from the 1960s was not what a painting was about, but how the painting could fuck with your head, using sly tricks of perception. The new Mary Dill Henry exhibit, Love Jazz, at Berry Campbell Gallery, collects paintings this Op Art pioneer completed between 1965-70. In her 50s by this time, she had reached her signature style, one of oscillating shapes that formed kinetic patterns and optical illusions. Click to Read More...

The clean geometric abstractions of Beverly Fishman are a brightly-colored, high-finish attack on the system, the pharmaceutical industry in particular. She borrows all the marketing from this field -- the colors, forms, materials, even the way surfaces are handled. It is a subtle form of cultural subversion that has been taking place at least since the 1980s. Click to Read More...

Before phones, the internet and television even, people stared into the fire, endlessly examining the shape-shifting flames, searching for meaning. During the Vietnam War, the U.S. military beamed swaths of light into the jungle, hoping nearby villagers would be frightened off by the appearance of ghosts. Monks in Thailand repurposed this technique to give people a way to communicate with their dead, a practice now known as Ghost Cinema. Click to Read More...

For street artist ChrisRWK himself, the phrase "Robots Will Kill" is a reminder not to get into a rut, not to let routine kill creativity, not to be owned by your own processes. Robots Will Kill. Here is his latest at the 212 Gallery in the Lower East Side of New York City. Click to Read More...

The human body is moved by electricity, both emotionally and physically. Cells spark electrical pulses, which align to form movements, thoughts, behaviors, in a way that is not fully understood. And just as people are moved by internal electricity, they are also affected by external sources of energy as well. In his latest exhibit at the Perrotin NYC gallery, Danish artist Jesper Just looked how the electricity of the individual intersects with that generated from the outside. Click to Read More...

American painter Edward Hopper was a painter of light, the real painter of light. He was also a painter of loneliness. In many of his paintings, there are few people milling about. Or if they are present, they appear solitaire, not communicating with one another. They look sad, wistful, or they look away. Both themes play heavily in the current exhibit his his work at the Virginia Museum of Fine Arts, which focuses on his career-spanning focus of people in hotels and travel lodges. Click to Read More...

City street art offers free entertainment for those who wander about a lot by foot. Having spent a fair amount of time walking around New York City, I could not help but start to notice all the work of the street and graffiti artists -- who they are, what their styles are, and even how they evolve over time. Street art enlivens dull spaces, uniting communities in the process.Perambulation is how I have gotten to know PhoebeNewYork, who is the mixed-media alter-ego of street artist Libby Schoettle. Click to Read More...

What is art good for? And what art is good art? These are the questions philosopher George Santayana sought out to address more than a century ago. Art is born from the need to humanize and rationalize objects, an attempt to better the conditions of existence. But at the same time, art is hopelessly fickle, inward-focused, and has no concern whatsoever in improving the outside world. And yet what those scornful miss about art is that it can possess a spiritual dignity, not found elsewhere, something that becomes representative and expresses an ideal. Click to Read More...

What I learned today: Early Christians had a complex love/hate relationship with the mythical unicorn. Unicorns showed up in the King James and some Catholic interpretations of the Bible. Some churches would even stash away what pastors assumed were unicorn horns (narwhal tusks sold to them by traders, evidently). They coveted the supposed water-purifying properties of the horn, but while dreaming of finding a unicorn, they also spent much artistic energy depicting the capture and slaughter of the unicorn, as this 15th Century artwork at the NYC Met Cloisters museum show Click to Read More...

Oscar Wilde's Dorian Gray remained young while his portrait aged in an attic. John Sargent (1856-1925), in a way, pulled off the opposite trick, preserving on oiled canvas the full beauty and animism of people who are now all long deceased.

Sargent painted portraits of his friends, often trading a payment for freedom of artistic direction, which allowed him to more accurately capture their personalities. Tight with Claude Monet, Sargent often borrowed techniques from impressionism to make his work more dynamic and subtle. The results remain almost eerily vivacious over a century later. Click to Read More...

"Bushwick Christmas" is how my pal Tania describes Bushwick Open Studios, which takes place in early June in Brooklyn NYC (June 6-7 this year).

Visitors throng the hood, seeking out art, drink, and camaraderie. The artists get their work noticed, the locals see a shit-ton of eye candy, and the bar staff pull their largest paychecks for the season. Everyone hits a roof-top party to watch the sun set on Manhattan. Celebrate!

Like any holiday, participants make elaborate plans in the months before, only to rush around in the hours prior assembling something, anything, for their soon-to-arrive visitors. This year especially so, it seemed. BOS2015 could have been called the seat-of-our-pants year, to hear a few artists describe their last-minute frantic preparations. Still there was a lot of cool art to check out. After all, something is new if you haven't seen it before... Click to Read More...

Street art is like television for urban perambulators. A secret channel open to anyone who just tunes in, it tells stories and captures your attention with brash spectacles of color and form.

When I first started walking about New York City five years ago, Roycer700 was one of the first street artists whose works I'd come to recognize. I'd see his monsters about town, everywhere. On neglected walls, hidden into industrial crevices, on anonymous post boxes, on the Williamsburg bridge. The man clearly got around.

America is a vast country. Even today, there is probably too much land for the people who inhabit the place, and we lay much of it to waste. The tangles of roadway connecting our homes and points of interest are rarely scenic; they are littered on each side with hastily erected fast food joints, strip malls, scrub land.

Which is why Margaret Morrison's latest series of oils, shown by the Woodward Gallery in NYC, are so fascinating. She draws beauty from these ravaged wastelands, using not only the colors they exude, but also the promises they hold. Click to Read More...

I don't know much about art, but one thing I do know a little bit about is LP covers. I grew up before MTV, which is to say before music came with visual accompaniment. Those days, when you bought an album, you took it home, put it on the record player and just listened. If you wanted visuals, you scanned the LP cover.

Which is why, at this year's Pulse NYC contemporary art fair, I gravitated to the oil paintings of J.P. Roy. His work reminded me of those album covers from progressive rock-era British bands of the 1970s, especially those from Roger Dean and the Hipgnosis studio. Click to Read More... 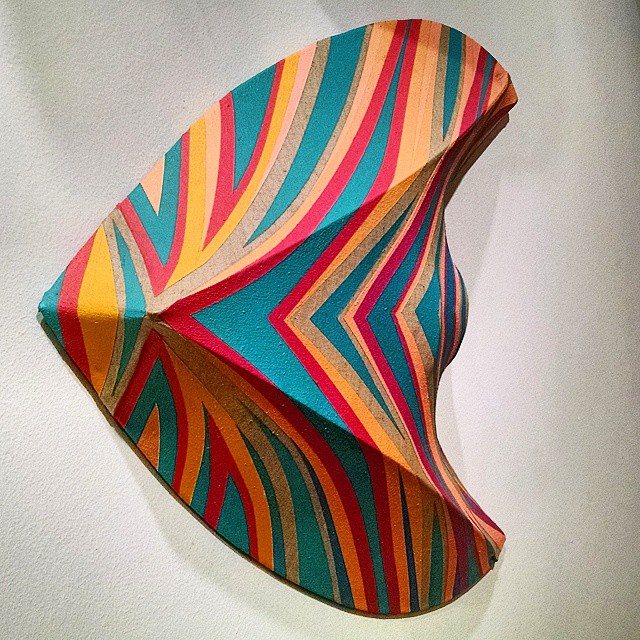 Some nights words do not describe how cold New York can get. Last Thursday was one of those evenings. Gallery hopping through Chelsea, we called it early, but before heading back to the E, we stumbled into an exhibit of linen wall sculptures of Janet Bohman. I do not know why exactly, maybe I was finally warming up from the frigid temp, but walking into the room of her works, I felt a surprising and somewhat unexpected sense of joy. Click to Read More... 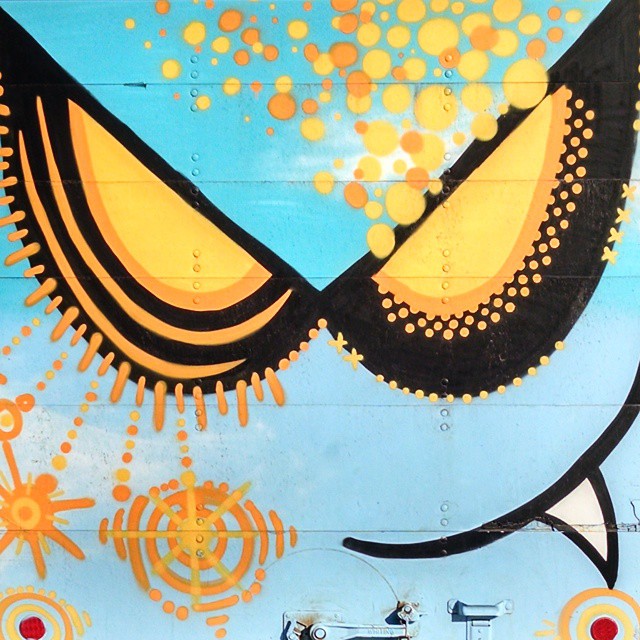 When I first heard of the passing of New York City street/graffiti artist Jeffrey Gamblero, AKA Korn, I was bummed I didn't have any shots on hand to share. After all, I've seen his wicked creations all over the city, and followed his progress on Instagram, but somehow neglected to post a few good photographs from my about-the-town ramblings. Then today, I was walking, pretty much at random, down a side street in deep industrial Bushwick, and, lo, this delivery truck decked out by Korn just rolled up and stopped momentarily right in front of me. Click to Read More...

Culture-jamming we used to call it, back in the day. Ron English is one of the artists currently working to subvert the images and messages we get from corporations paying to get them in front of us. Click to Read More... 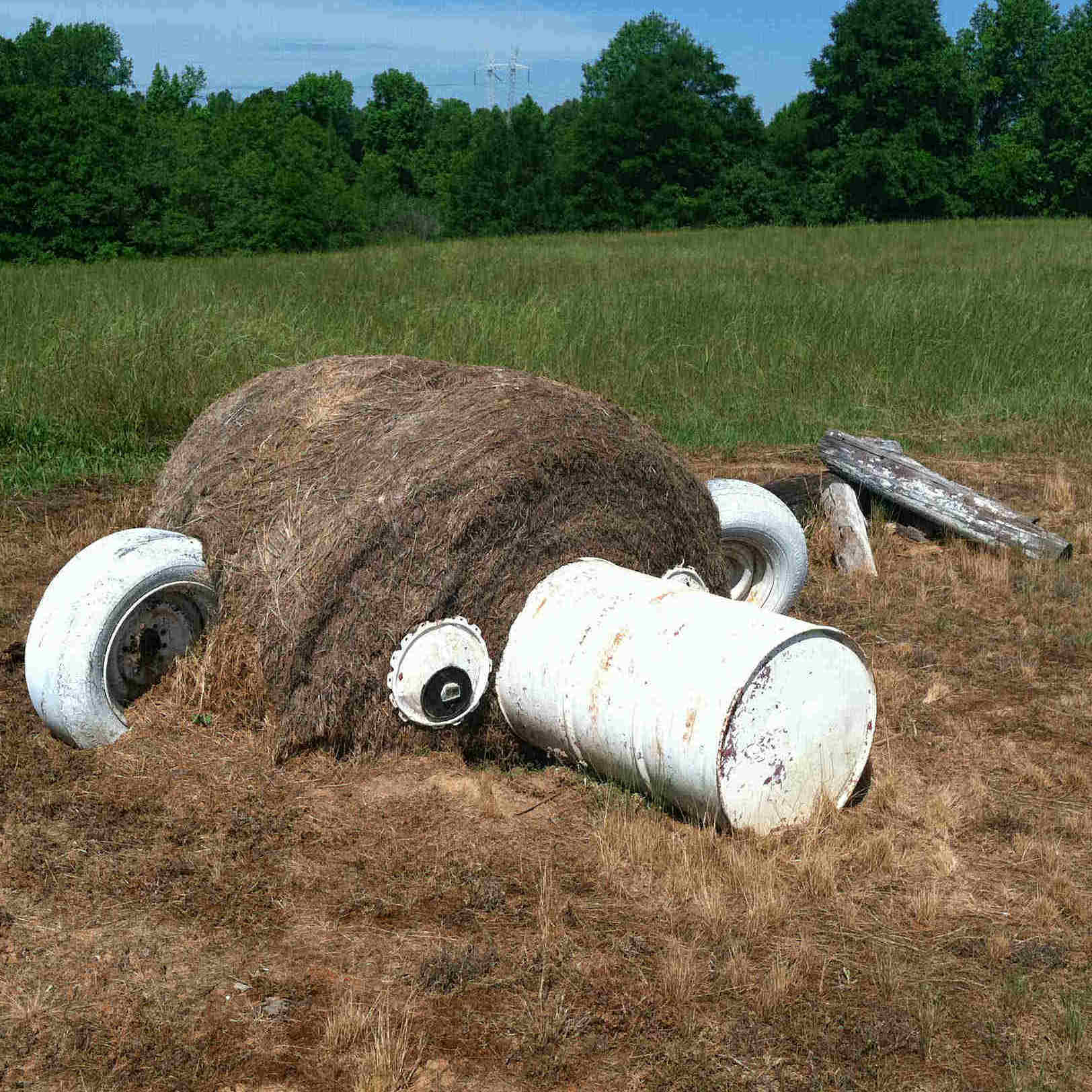 We found Bird's Farm more or less by accident, driving Alabama Route 43 south from Eutaw, as a scenic diversion off the highway, to New Orleans. Not a lot happening in those back-country parts, so it can be a bit unsettling to suddenly see a row of surreal creatures lined up in a field, all fashioned from hay bails and assorted junk. Click to Read More...

What better way of demonstrating the depthly volume of your new gallery space than by having large, sometimes menacing, balloon creatures loom over everything? The rain outside was torrential, and mighty cold, but worth sloshing through last Friday eve for the debut of Succulent, a Greenpoint gallery, run by street artists Cern and Sek3, that had plenty to gaze enjoyably upon. Click to Read More... 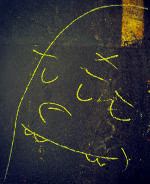 Of the five major bridges crossing into Manhattan over the East River, the Williamsburg Bridge is the one most adorned by graffiti/street artists. It connects two artistic-minded NYC communities, the Lower East Side in Manhattan and Williamsburg on the Brooklyn side. Click to Read More...